It’s tempting to think of decluttering as more of an aesthetic choice. Something aspirational that works for some people better than others.

As it turns out, bestselling author Marie Kondo was definitely onto something with The Life-Changing Magic of Tidying Up. In the recent Netflix show inspired by her book, Kondo’s methods showcased why decluttering is good for you. Embracing a less-is-more approach led to tangible life changes, including improved sleep, less anxiety, and a happier, healthier lifestyle.

While those mismatched socks, extra kitchen appliances, and surplus of toys, tools, and outdated electronic devices may seem like no big deal, there’s a proven connection between decluttering and mental health.

While those mismatched socks, extra kitchen appliances, and surplus of toys, tools, and outdated electronic devices may seem like no big deal, there’s a proven connection between decluttering and mental health.

According to research shared on VeryWellMind.com, women with homes filled with more clutter had higher levels of the stress hormone, cortisol than those with more streamlined spaces. That overwhelming stack of papers, perpetually lost keys, and piles of dirty clothes can lead to other unintended behaviors including:

Not Just Neat vs. Messy

Decluttering isn’t a referendum on whether someone is neat or messy. Rather, decluttering for mental health has numerous benefits that cause life to be less stressful and more joyful, according to research from the Mayo Clinic.

For example, if your desk is jam-packed with stuff, it may be more difficult to do your job. A cluttered environment can make your mind cluttered as well. And the brain’s subsequent lag in processing information can make you feel more frustrated, too. Taking a few minutes to organize your space, whether at the beginning or end of the day, can help you work more efficiently.

Taking a few minutes to organize your space, whether at the beginning or end of the day, can help you work more efficiently.

Messy, chaotic spaces can also have an impact on the choices we make. Research published in the National Library of Medicine has shown that people who live in extremely cluttered homes are 77% more likely to struggle with being overweight.

Even short-term choices, like what to snack on and how much, can be affected by how we feel in our environment. In contrast to someone in a clean, orderly space, research shared by SAGE shows that being in a messy room will make someone twice as likely to eat chocolate than an apple.

People who sleep in a cluttered bedroom are also more likely to struggle with falling asleep and waking during the night, according to Men’s Health. 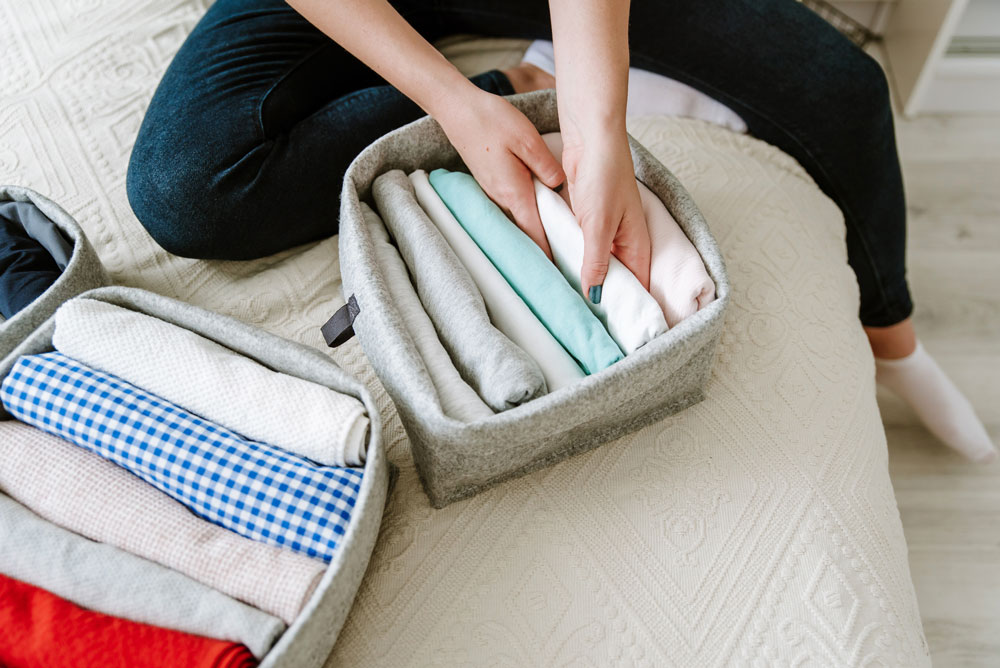 Contrary to what advertisers may say on television, send to your feed or inbox, or try to sell you online, more stuff doesn’t equal more happiness. Statistics show the opposite is true. In one study cited by the Mayo Clinic, when toddlers were given four toys to play with, they played twice as long than when they had 16 to choose from.

More sometimes is just that: more. And when you accumulate too many things or have tendencies toward hoarding, it makes decision-making increasingly difficult. And it leaves you with more to pick up and find a space for, which can be stressful, too.

Having too much stuff can also be a symptom of a bigger problem such as depression or anxiety. In these instances, discarding items can cause actual pain in the area of the brain associated with physical pain. When people compulsively acquire things and can’t throw them away, they may experience mental anguish that can be treated with cognitive therapy.

Enjoying the Mental Benefits of Decluttering

Your house doesn’t have to be Pinterest-perfect for you to appreciate the mental benefits of decluttering. And no one says you have to tackle the job in one fell swoop. Focusing on the enormity of the task can feel overwhelming and make the process seem impossible. But taking deliberate, doable steps to remove clutter from your life will have a positive impact on your mental health.

Here are just a few ways to help you get started:

If you or someone you love struggles with where to begin when it comes to decluttering for mental health, cognitive behavioral therapy from trusted professionals at The Meadows Malibu can help. Don’t hesitate to reach out for help in making your mental health a priority.